Why Kanye West and Kim Kardashian Belong on the Cover of Vogue, Plus Top 5 Most Controversial Edits

The whole world is still buzzing about Kanye West and Kim Kardashian’s Vogue cover; the topic has arguably been more hotly debated than the missing Malaysian plane. Whatever side of the fence you fall on, there’s no denying that putting the “#WorldsMostTalkedAboutCouple” on the cover of the champion of all glossies will draw all kinds of attention, and whether it’s praise, pity, or disgust, it’s a clever marketing tool. 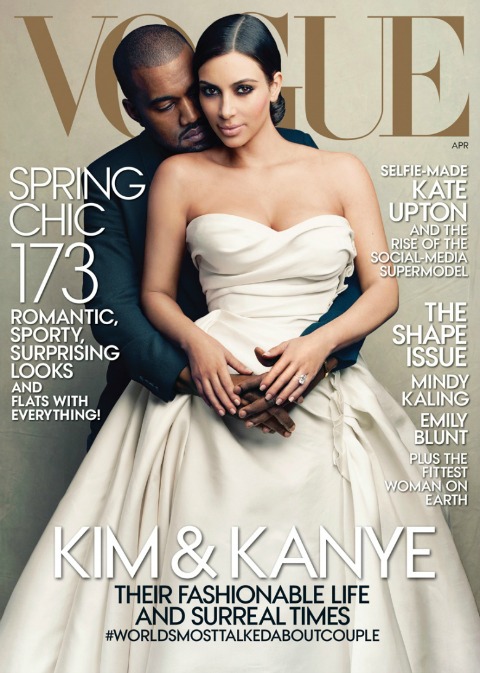 Take Miley Cyrus for example: she may not be the most admired teen in the world, but her continued antics and misbehaviour has only shot her career into unmeasurable success (actually, it is measurable: her Bangerz album has sold almost 1 million copies, and her tour of the same namesake is still reflecting stellar sales).

But back to Kanye, Kim, and that Vogue cover. Jake Woolf recently wrote an article titled, “In Defence of Kanye and Kim’s Vogue Cover“, stating Blake Lively, a former Vogue cover girl, is no more deserving of cover-stardom if the honour is measured solely by talent. Feelings of worthiness aside, Jake gets down to business: “Name two other people in fashion—no, the world—who have the ability to affect the buying habits of real people at nearly the same level. It’s okay, I’ll wait.”

He goes on, giving it to us straight up, saying, “is it just me, or is Vogue still a magazine owned by a multi-million dollar company whose sole purpose is to sell magazines? People act like this getting a cover stuff is same as copping an Oscar or even winning a Nobel Prize. Have you seen a Vogue lately? The first 100 fucking pages are ads, and many of the others might as well be. Vogue is just another product. And what better way to sell a product than to put two controversial, yet wildly popular celebrities, each with strong ties in fashion, on the cover?” Rattling off true statements about the couples’ influence in fashion (the endless lineups at every DASH boutique; Kanye’s ability to sell out every store’s stock of  Escobar sweatpants by avid fans who spotted him wearing a pair of them once, or anything else he endorses for that matter), Vogue is a business, and like it or not, putting these two on the cover is selling copies.

Long-stading Editor-in-Chief Anna Wintour explained her choice, stating “part of the pleasure of editing Vogue, one that lies in a long tradition of this magazine, is being able to feature those who define the culture at any given moment, who stir things up, whose presence in the world shapes the way it looks and influences the way we see it. I think we can all agree on the fact that that role is currently being played by Kim and Kanye to a T.”

How do we feel here at amouraimee.com? Travis, the hip-hop aficionado, Rick Owens loving, high top rocking, streetwear-style king is all for their cover. Knowing every word to every song on every Kanye album (and every hip-hop album since 1990, for that matter) and boasting a healthy-sized collection of Nike Air Yeezy‘s, T was clearly all for it; he also pointed out the pair are not just fashion icons, they genuinely have a love, interest and influence in fashion, too. Reminding me that Kim started her fashion empire at the young age of 14 when she started her eBay obsession, and Kanye’s endless tirades about the industry only boosts his fashion cred, there’s no denying these two are as integrated in the industry as Karl Lagerfeld is to Chanel.

As for me, I completely and wholeheartedly respect the decision when solely speaking from a business perspective. Truthfully, and personally, I miss the integrity of days past when fashion models were on the cover of fashion magazines, but I know that’s an old-fashioned way of thinking and those are the days of yesteryear. In our celebrity-crazed, over-sharing, non-stop tweeting culture, Kanye and Kim belong on the cover of Vogue. #LongLiveFashion.

Kanye and Kim’s cover is hardly Vogue’s first controversial cover or spread. Over the years, the magazine  (all of its international editions) have come across a few bumps in the road and been on the receiving end of some pretty harsh backlash. Take a look at the top 5 most controversial Vogue-isms over the years.

5-  Lena Dunham’s Vogue Cover is Photoshopped
So what? What page in any magazine ever hasn’t been photoshopped? The difference here is that Jezebel offered $10,000 for the unretouched photos of the “Girl’s” star/creator, as it was a severe departure from her usual role-modelling ways of embracing imperfections and refusing to adhere to the Hollywood size 0 standard. She defended her cover spot, saying she “never felt bullied into anything,” and “felt that [I] was very lucky and that all the editors understood my persona, my creativity and who I am.” Fair enough, Ms. Dunham.

4- French Vogue Puts a 5th Grader on the Cover
10 year old model Thylane Lena-Rose Blondeau posed for the French edition in the January 2011 issue, and while beautiful, the child looked rather disturbing and rang alarm bells when provocatively modelling designer pieces that have no place on the playground.

3- Racism in Japanese Vogue
Vogue Japan’s (in)famous Editor-at-Large Anna Della Russo often stirs up controversy, but one of the most memorable eyebrow raisers in recent history was a shoot (that ironically featured (in)famous model Crystal Renn) showed a behind the scenes photo of Renn’s eyes being taped to slant upwards and make her look like she was of Asian descent. Which leads us to…

2- More Racism
Vogue editions from all over the globe are often slammed and criticized for displaying blatantly racist shoots and comments, like when Vogue Italia ran a fashion feature on it’s website where it showed a model wearing large hoop earrings that they called ‘slave earrings’. The accompanying text read ‘If the name brings to the mind the decorative traditions of the women of colour who were brought to the southern United States during the slave trade, the latest interpretation is pure freedom.”

Repeat offender French Vogue created an outrage when they literally painted Dutch stunner (and notoriously pale) model Lara Stone, well, black. Technically, she was painted dark chocolate brown, but the point was made. 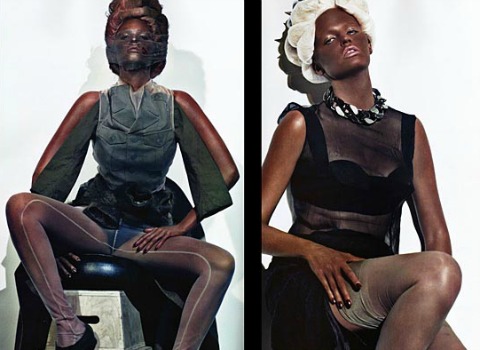 Not to be outdone, Vogue Italia stirred up controversy when they released Vogue Black in an online edition, creating separate issues for the races.

And who can forget the US edition’s cover that featured megastar baller LeBron James clutching supermodel Gisele Bundchen around his arm, scary, screaming game face on? Immediately compared to King Kong, the world was outraged that the first black man on the cover of the magazine depicted him as dangerous and brutish.

1- Australian Vogue Editor fired After 25 years, Writes ‘Paris Thin’ tell-all
The sudden dismissal of Australian Vogue’s Editor-at-Large Kirstie Clements was a bit shocking, but Clements simply dismissed it as nothing more than a “regime change”. Shortly after her departure, however, she penned her first book, entitled ‘The Vogue Factor’, in which she divulges disgusting and disturbing insider information about the sad and sick lengths models go to maintain a ‘Paris thin’ figure. The book thinly veils blame on the magazine, if not by the title of the book alone. 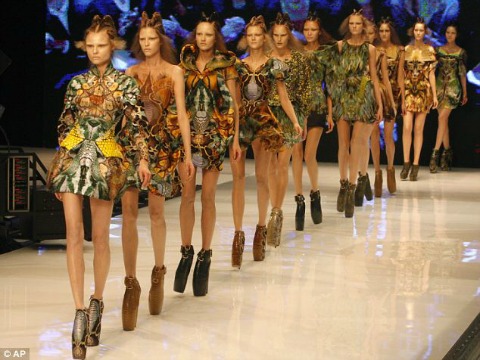 One thought on “Why Kanye West and Kim Kardashian Belong on the Cover of Vogue, Plus Top 5 Most Controversial Edits”